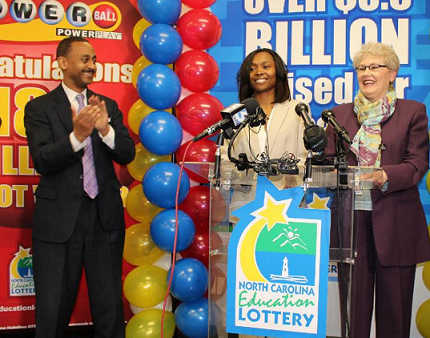 A single mother of four from a small North Carolina town bought one of the three winning tickets sold in the estimated $564.1 million U.S. Powerball jackpot drawn earlier this month. 26-year-old Marie Holmes who lives in a single-wide trailer in Shallotte, North Carolina matched all five numbers and the Powerball number on February 11, 2015 the Powerball game. The Powerball drawing Wednesday evening was the third-largest in Powerball history and the fifth-largest jackpots in U.S. history.
She chose the lump-sum payment option of $127 million, which will total about $88 million after taxes. She said she’ll tithe a percentage of the money to her church and charities. she has four children All are under the age of 7 — three daughters and a son with cerebral palsy and had been looking for work. she said she was grateful for the chance to provide more for them.
The three winners will split the jackpot, Another of the three winners has elected to remain anonymous in Puerto Rico. The third winner, in Texas, hasn’t come forward. The Texas Lottery posted on Twitter that one of the winning tickets was sold at Appletree Food Mart in Princeton, a city about 40 miles north of Dallas.
Powerball winning numbers for Wednesday, February 11, 2015 are 11, 13, 25, 39, 54. The Powerball number is 19.