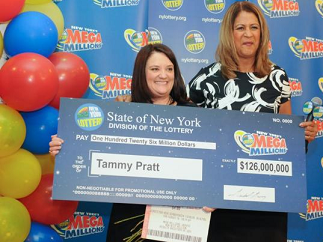 Tammy Pratt, 47, a real estate broker, of South Fallsburg was the sole winner of the $126 million Mega Millions jackpot drawing of February 27, 2015. She bought $4 worth of tickets instead of her usual $1 when she noticed the jackpot for the upcoming drawing had topped $100 million. Pratt’s intuition paid off, Her incredible good luck came on the heels of another astounding win in Sullivan County after the announcement in January of Harold Diamond of Wurtsboro winning a $326 million Mega Millions jackpot in two months.
She was handed a hefty check along with a bouquet of red roses by lottery officials at a ceremony unveiling her as the sole winner. The winning ticket was purchased at the South Fallsburgh Food Mart at 5105 Main Street in South Fallsburg. The Food Mart will receive a $10,000 bonus for its role in selling the jackpot-winning Mega Millions ticket.Pratt is planning to take her prize in one lump sum of $81.6 million, net approximately $54 million after required withholdings.
Mega Millions winning numbers for Friday, February 27, 2015 are 7, 49, 53, 60, 64.
The Mega Ball number is 04. The Megaplier number is 02.