A man from Noel, Missouri came forward on Aug. 4 to claim Missouri’s first Mega Millions jackpot. Raul Ahumada, 60 winner of $25 million Megamillions ticket claims his prize within 7 Days, the winning numbers are drawn July 31. Ahumada, said he plays several Missouri Lottery games, including Mega Millions. When he checked his tickets on Aug. 3, he thought he had won $25,000. It wasn’t until he took his ticket to the Lottery’s Springfield office that he discovered he actually won $25 million.
Ahumada purchased his winning ticket at Rio Alce convenience store, 441 N. Highway 59, in Noel. He let the computer select the number combination on his winning ticket for the July 31 drawing. Those numbers were 28, 32, 33, 40, 46 and the Mega Ball number was 10.” He is the 427th ticket worth $1 million or more sold in Missouri since the lottery started in 1986.
Ahumada, who works at a chicken processing plant, said he and his wife, Rosa, plan to “try to find a nice mountain home and stay there.” He also plans to go back to Mexico to visit his family and his mom’s grave.
Mega Millions winning numbers for Friday, July 31, 2015 are 28, 32, 33, 40, 46.
The Mega Ball number is 10. The Megaplier number is 04. 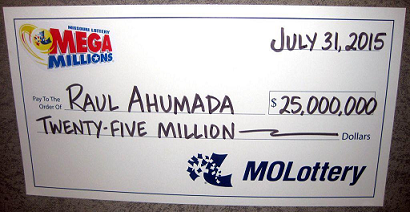